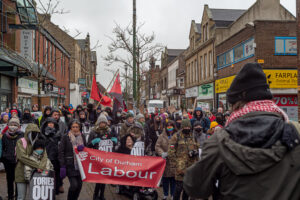 Here are three of the speeches from our demonstration bringing people across the region together in solidarity.

– faith has no borders!

– love has no borders!

– hope has no borders!

Or we succumb to the mentality of the hostile environment

– become a country of hostility

– a country of narrow nationalism.

Be under no illusion, Hassockfield is at the heart of the hostile environment. The Hostile Environment has many guises:

– Taking away the right to work

A hostile environment that starts by stoking up racism and cruelty in the national media and ultimately ends up with 27 people drowning in the English Channel. It is the policies of our Government forces the desperate into the hands of human smugglers with the inevitable tragedies that follow.

We are here to say:

Love has no borders

Faith has no borders

Hope has no borders

So we will work alongside all who seek the end of racism,

all who seek to oppose the Nationality and Borders Bill –

and all who fight to close down Hassockfield. 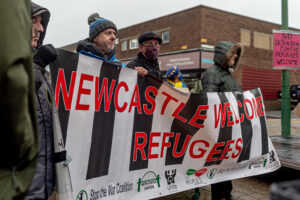 “I am a London based human rights lawyer, with a particular focus on women’s human rights, especially in the context of gender based violence, including sexual violence in conflict and post conflict environments, and on the special vulnerabilities of IDP and Refugee women, widows, wives of the missing, and their children. And of course of women, girls and children in prison or other detention facilities in this country.

How I wish I was with you today in person, and hope to be with you in any future demos

I, along with so many other MPs, Peers, Lawyers and human rights activists am utterly appalled at this outrageous plan to open a new Immigration Centre on the site of the  utterly notorious former Hassockfield secure detention centre (where so many young men were both physically and sexually abused in the 70s and 80s).

So this shameful location will continue to be a place of extreme suffering, but this time, the victims will be the most vulnerable, traumatized, women in the world…..those that have risked their lives on the most dangerous journeys to our shores, fleeing terrible violence, torture, trafficking, slavery, rape, and murder to find safety for themselves and their children.

Priti Patel violates international law including the Refugee Convention by locking up innocent women.  Such detentions have no place in our society, and confining these women will only add to their mental distress, even increasing incidents of self-harm, and attempted or actual suicide. Have we learnt nothing from hearing of the experiences of refugee women locked up in YARLS WOOD,, several of them pregnant, and rape victims, denied even legal assistance, or counselling and adequate medical care ?

What the Home Office should be doing of course is to provide safe legal routes for refugees to come here to claim asylum.  Besides, these women cannot be “removed”, as we no longer are a member of the EU.

Migration  is not a crime.  Seeking asylum is not illegal.

I also vehemently oppose the new Nationality and  Borders Bill coming up for debate next Monday and Tuesday.

Have we completely lost our moral compass?  We could all be refugees, it is just an accident of birth where we started our lives.

My own grandmother was a refugee fleeing pogroms in eastern Europe, so the plight of these women makes me weep in anger and frustration.

But what our present HOME SECRETARY is doing is unlawful and morally reprehensible, actually abhorrent!  The UNHCR has also condemned this move.

I believe this site was originally to be used to build affordable homes, not yet another YARLS WOOD.  So we cannot allow this detention centre to be opened.

I greet you all and am with you in spirit, if not in the flesh and hope I can be with you at any future demos.” 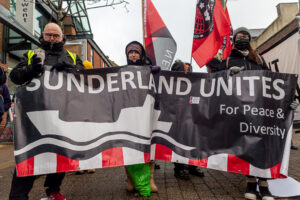 “As the Regional Organiser with These Walls Must fall Liverpool, I’m bringing solidarity from this  network of allies and experts by experience coming together to end detention, and fighting the day to day manifestations of that brutal system. Where individuals are finding strength to survive in the day to day – each act of joy and survival an act of resistance, and where the response to the tragic events of the recent bombing has shown courage and care.

We’ve have glimpsed a new world through the Coronal Years – one where those who are least respected and valued by our government have been sacrificed: safety for the privileged protected at the cost of people’s lives and suffering. And meanwhile, the leaders of this country have been working to quietly introduce changes we must be conscious and conscientious about. Despite existing government policy to reduce the numbers of people in detention, there’s a proposal for a new facility at this site, which will lock women away. Women who are friends, mothers, carers, lovers. Women who have brilliance, skill, knowledge and laughter to bring into to our communities.

We are seeing the world as we know it collapse around us, severe floods engulfing land, fierce weather systems wreaking havoc on places people know and love and our leaders aren’t stepping up. They’re making terrible decisions which harm and isolate people.

But communities, neighbourhoods, colleagues and friends old and new are coming together and making the change we so desperately need. We saw it in the mutual aid groups springing up with the onset of the pandemic, and the legacy of those continues. We see it in the actions of groups like No2Hassockfield, who are coming together monthly to show their resistance to this cruel new proposal. It is here you find the courage, conscientious care and compassion which is needed in these times of terrifying change.

I also bring you greetings from Sheffield where the terrible experiences endured by people like Simba who has received life threatening bills for health care, whose community united to stand with him to fight for free healthcare for all, and no borders in the NHS. Where the desire for everyone to be well, and looked after is being shown in their campaign.

And greetings from the grassroots activist community, who know their work is only possible hand in hand with the persistent committed efforts of local campaigns and people like the work being done here.

Until we are all free!” 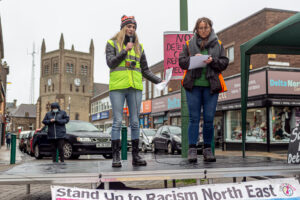 We need to be heard at our December 18th monthly demo!

The next Monthly Demonstration against the proposed detention centre in[...]

Protestors demonstrate support for women in detention at Hassockfield

Protestors demonstrate support for women in detention at Hassockfield

Analysis of the legal and practical aspects of effective alternatives[...]