‘Love has no Borders!’

February 21, 2022 Posted by Alison Stancliffe No To Hassockfield No Comments 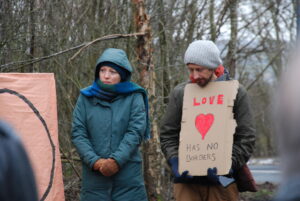 Human rights campaigners and local people were again at the Hassockfield/Derwentside Immigration Removal Centre (IRC) on Saturday 19th February despite the winter weather, supporting  the women who are now imprisoned at the centre. It is thought that there are currently less than 20 women being held at the site, which has over 80 staff. The protest was our 8th monthly demonstration. 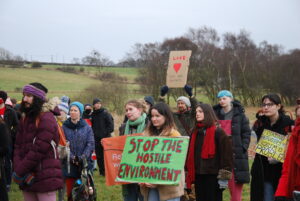 There were passionate speeches and plentiful placards on Saturday. We’ll fight to keep up the morale of the imprisoned women and the pressure on the Home Office for as long as it takes. 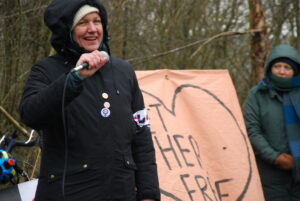 Among the speakers was Cllr. Sam Townsend from the Women’s Banner Group. She said:

“The women’s banner group are happy to stand in complete solidarity with women across borders, we reject the use of immigration detention centres as both inhumane and ineffective. We believe in bringing people together rather than driving them apart” 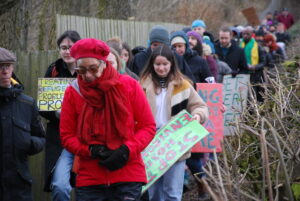 Another speaker, from  from Abolish Detention, said:

“We are today in Medomsley, once more, not only to show our solidarity with those imprisoned here and elsewhere but to make sure that the people who have the power to shut this place down know that we are not giving up; we will continue to fight. Whatever the Home Office and their profit-making contractor Mitie tell us, there is no way that imprisonment in centres like Derwentside can be just or free from harm. We want to see an end to detention not just here, but everywhere. We believe that these centres are not solely a concern for those imprisoned (or at risk of imprisonment) in them but for us all; none of us are free until we are all free.”

Here’s a reminder of what we are fighting to change:

The centre at Hassockfield is a category 3 style prison for women. Some of the women detained have been moved from other detention centres, some have been detained when attending for signing on, as they are required to do at regular intervals at police stations, often far from where they live.  Some of them have been arrested and forcibly removed from where they were living, usually very early in the morning to catch then unaware and unprepared.

A small percentage of women currently imprisoned at Hassockfield/Derwentside IRC will have committed a crime, but they will have already served a prison sentence. Research by Women for Refugee Women shows that over 85% who had been detained in Yarl’s Wood had experienced rape, domestic violence, forced marriage, forced prostitution or female genital mutilation. Category 3 means that the government know that these women are very unlikely to try to escape. However, they will be locked up and be denied their basic freedoms, with no certainty of when they will be released. 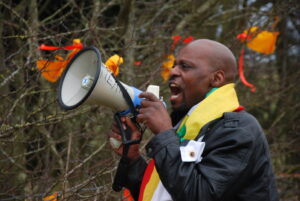 If you believe love should have no borders, join our campaign. Simply send us an email to join our mailing list.

Support the Detained Women on Saturday