Little Joy from the High Court

August 3, 2022 Posted by Alison Stancliffe No To Hassockfield No Comments 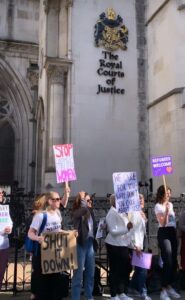 In June our partners Women for Refugee Women , against many odds, mounted a judicial challenge to the Home Office. It overran its allotted two days in court, not least because of many defence delays, but on July 28th the judgement was  finally concluded and, to our dismay, the challenge was struck down.

This is what WfRF posted on the day:

“Today we received the news that our legal challenge against the Government has not been successful. We are deeply disappointed with this outcome. ⁣We remain firm in our belief that a consistent in-person connection with a solicitor is the best method of legal advice, so women can develop rapport and trust and feel safe enough to talk about their traumatic experiences. ⁣Though this isn’t the outcome we had hoped for, this isn’t the end of our campaigning to end women’s detention! ⁣⁣Together we can continue to push for change and to create a more welcoming society for women seeking safety. ⁣Watch this space for next steps, including a possible appeal against the judgment!”

Scroll further to read a fuller statement. It indicates that the crucial point – i.e. in Derwentside good legal advice is far below any acceptable standard – was still not tested by any on-site visit.

We’ll continue to work with WfRW to get justice in this matter. It goes to the heart of the cruelty of placing such a facility in a location that is not fit for purpose, if the purpose is to ensure just treatment for those detained in it. 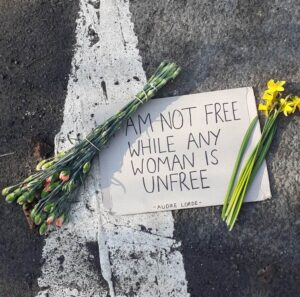 “The judge who heard the case has not upheld our position that by detaining women in Derwentside without access to in-person legal advice, the Home Office denied them access to justice. The ruling states that the provision of legal advice via telephone or videocall for the first six months that Derwentside was operating was lawful. It notes that “the quality and convenience of modern video-conference facilities is very good, and comparable to an in-person meeting”, and that “the telephone is an adequate means of communication for most people”.

Sadly, we know this is not the case for the women we’ve worked with in detention over many years – the majority of whom are survivors of rape and other forms of gender-based violence. Disclosing past traumatic experiences, which are often central to women’s cases, is hard for women to do to an anonymous voice on the phone, or via videocall to a stranger. We know that there are already significant and particular barriers that women face in disclosing their experiences, such as shame and stigma. These are only exacerbated by remote legal advice.

We remain firm in our belief that a consistent in-person connection with a solicitor is the best method of legal advice, so women can develop trust and rapport, and feel safe enough to talk about their traumatic experiences.

Shortly before the court hearing got underway, the Home Office also stated that it has now secured in-person legal advice at Derwentside, to operate from 1st July 2022. Yet, the three legal aid firms who will be delivering this advice are based hours away from Derwentside, in Bradford, Coventry and Hounslow. The judge additionally dismissed our challenge on the basis that it is too early to say that these new providers will not be able fulfil the requirement to deliver in-person advice. However, figures we have recently obtained show that in the first week of the new in-person legal advice contracts at Derwentside, no in-person legal visits took place there.

Further, the Government’s cruel plans to remove people seeking safety to Rwanda make the need for proper, in-person legal advice at Derwentside more urgent than ever,. Anyone in detention facing removal to Rwanda only has seven days to challenge this decision, and women have recently been targeted by these plans. Women for Refugee Women is now in touch with three women who have received notices of intent for their removal. All three women are survivors of trafficking. Yet, instead of offering them protection and the chance to rebuild their lives in the UK, the Government is proposing to traffick them against their will to Rwanda. There may be more women who have received notices of intent for Rwanda. However, the Home Office recently refused to state how many women have received such notices.

Despite the disappointing outcome of the challenge, we are proud that, with your support and solidarity, we were able to hold the Government to account and advocate for women in Derwentside. Thank you to everyone who donated to help cover our legal fees, spread the word about our campaign, and took action to build pressure on the Government to close its detention facilities. We couldn’t have done this without you.

Of course, this is not the end of our campaigning to end women’s detention. As we consider possible next steps with the legal challenge, including an appeal, we will also come back to our supporters with other actions you can take. Watch this space! “

Many of the women in detention with whom I am in touch have found it incredibly difficult to talk about their previous experiences of rape, sexual exploitation and domestic violence. The Home Office’s own guidance recognises the significant and particular barriers women face in speaking about such experiences. Yet despite this, for the past six months the Home Office has been locking up women at Derwentside detention centre and expecting them to disclose their experiences of violence and abuse to someone they have never met in person, over the phone or via videocall. The Home Office’s cruel and reckless treatment of women in detention, the majority of whom are from racially minoritised groups, is further evidence of its institutional racism. Derwentside detention centre should never have opened and we urge the Government to shut it down immediately.

We are disappointed that we have lost before the Administrative Court on this very important challenge. We believe there are strong reasons to appeal this decision and are considering next steps on this.

We initially took some comfort from the fact that we at least compelled the Detention Duty Advice Scheme to be run with in-person advice. However, there are concerns that this may not be the case. We are looking into this.

Watch this  video! It’s Refugee Week, with lots of events[...]