April 16, 2022 Posted by Alison Stancliffe No To Hassockfield No Comments 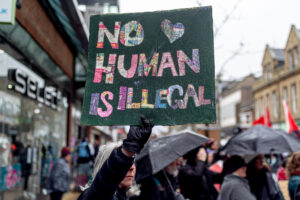 Our regular monthly demonsration took place today, in the context of a breaking news story that has a real bearing on the future of  Hassockfield aka Derwentside. An announcement on 14th April, just as the Easter Weekend was upon us, of a plan to send asylum seekers to Rwanda

The response was graphically summed up by Ian Blackburn, the SNP’s Westminster leader, who told BBC Radio 4’s Today programme: “It’s just chilling, absolutely chilling, to think that people who are coming here for a whole host of reasons – vulnerable people – are going to be taken all the way to Africa to be processed. This is not the mark of a civilised society. It’s evil.”

Our partner Women for Refugee Women has posted a powerful and informative statement on its website, which we print in full here for you to read.

“Today, Priti Patel and Boris Johnson announce their cruel agreement to fly people seeking asylum here in the UK over 4,000 miles away to camps in Rwanda.

The five-year trial, which will cost hundreds of millions of pounds from the public purse, will mean that people are removed to Rwanda on a one-way ticket. Under this plan, people will have their asylum claims processed in Rwanda and, if they are successfully granted refugee status, will be forced to settle there, rather than in the UK.

People who are seeking asylum are fleeing for their lives from war and persecution. The threat of being flown to Rwanda won’t stop people from needing to claim asylum in the UK, but it will cause them immense harm.

WfRW director, Alphonsine Kabagabo, says: “I know how it feels to have to uproot your life to seek safety. I just cannot imagine the impact it would have had on me to be flown to another country as soon as I had arrived somewhere where I thought I would be protected. I am appalled that the UK Government would be so cruel as to even consider this policy.”

This new trial agreement, which comes before the Nationality and Borders Bill has passed through Parliament, means that people who need protection will not be able to access a fair hearing in the UK. Offshore processing has been subject to fierce opposition from across the political spectrum in debates on the Bill so far. In what appears to be a deliberate tactic to avoid scrutiny, the Government is introducing this policy at Easter, when MPs are on recess.

For years, we have been campaigning to end the racist practice of detention here in the UK because it is extremely harmful and retraumatising. Our research has shown how women who have survived rape, torture and trafficking are routinely detained, in breach of the government’s own guidance, and we have documented how being locked up devastates women’s mental health. In December 2021, the Home Office started locking up women in the new Derwentside detention centre in County Durham. Ensuring that women have access to support and legal advice in this detention centre 270 miles away from London has been extremely difficult. How will there be any oversight of conditions and access to justice in camps 4,000 miles away?

Furthermore, history shows that offshore processing doesn’t work as a deterrent for desperate people looking for safety: all it does is harm. In Nauru, where people seeking asylum in Australia were previously sent while their asylum claims were considered, over 2,000 incidents of assault, abuse and self-harm were uncovered. Australia did not see a reduction in people arriving on boats to claim asylum.

This agreement with Rwanda is an inhumane and disproportionately expensive way to handle the asylum claims of people who desperately need a safe place to rebuild their lives. We are in total opposition to these disgraceful plans and call on the government to scrap them immediately before immense harm begins. “

No to Hassockfield will oppose this plan and continue to challenge the policies behind it that have led to the opening of Hassockfield. Make a date to be at our national rally on Saturday 14th May in Durham.  Watch out for more details of the programme and our inspirational speakers. 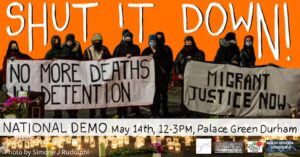 Agnes Tanoh renews appeal for signatures on her petition

Agnes Tanoh told a meeting of No To Hassockfield supporters[...]

Find out more about Legal Aid in IRCs

This piece of research will give you a thorough understanding[...]