“I know about Detention at First Hand!”

October 19, 2021 Posted by Alison Stancliffe No To Hassockfield No Comments

The inspirational Agnes Tanoh from ‘Women for Refugee Women’ spoke powerfully to protesters at the monthly gathering outside the gates of Hassockfield on 16th October.

She inspired us all to keep up the struggle to prevent Hassockfield from opening as an immigration detention centre for women.

She urged us on, drawing on her own grim history of detention at Yarl’s Wood during her eight year struggle to be allowed the right to live in safety and freedom. 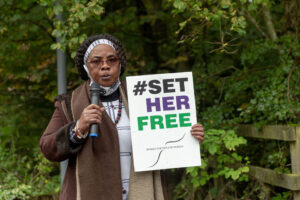 This is what Agnes said to everyone at the gates of Hassockfield:

“Women for Refugee Women is proud of you and says a big thank you to you. Actions speak louder than words and this is what you have been doing by protesting here before, and today.

Together, we want to continue to fight until we succeed since we are fighting for a good cause.

We have to act and speak out to stop Hassockfield from opening.

Women for Refugee Women is here for two main reasons. Firstly, we – and you – don’t want women to be locked up because they are seeking safety and protection.

Detention centres like Hassockfield are prisons. But they are worse in their conditions because you are locked up without trial, which is opposite to the basic principle of British Values.

Detention is a prison where you don’t know the length of your sentence.

The second reason for our presence here today is that Hassockfield is also a removal centre. Do we want to be accomplices to deporting women at risk of persecution back to the country from which they fled?

Do you know that earlier this year, in Birmingham, a teenage Afghan, a 19-year-old boy, who feared the UK would deport him, killed himself?

Let us say no to removal.

I want to ask to Priti Patel, does she know how many UK citizens leave this peaceful country to live in other countries?

Instead of locking up those vulnerable women with the intention of deporting them back to face more violence, we should be treating them with compassion and dignity.

So let us shout together: No to Hassockfield! 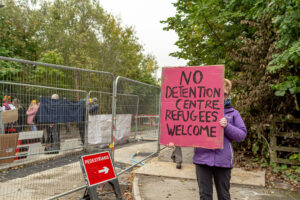 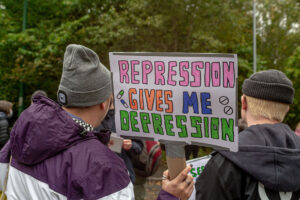 Help us to raise funds for a legal challenge  here

Analysis of the legal and practical aspects of effective alternatives[...]