The No To Hassockfield Campaign 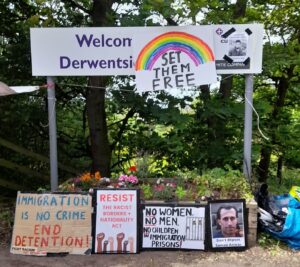 No To Hassockfield is a campaign  set up in early 2021 to fight for the closure of the new Immigration Removal Centre (IRC) for women in County Durham. Originally known as Hassockfield,  it has now been renamed as Derwentside. It replaces Yarl’s Wood as the main IRC for women in the UK.

The IRC is contracted to be run by Mitie Group PLC , an outsourcing giant and the largest provider of immigration detention in the UK. It’s one of the biggest profiteers of the ongoing hostile environment towards people seeking sanctuary and other migrants.

The IRC has accommodation for around 80 beds. It has a constantly shifting number of women occupants, detained for different reasons having been refused the right to remain in the UK, though the appeal cases of many are still ongoing.

Hassockfield/Derwentside IRC is situated between Durham and Consett, outside the remote village of Medomsley – a name still notorious locally as the site of the former Medomsley Detention Centre, where large scale abuse of young men in the 1960s, 1970s and 1980s was uncovered in Operation Seabrook, begun in 2013. 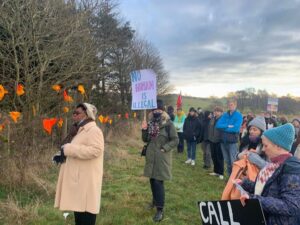 The Immigration Removal Centre, run by the Home Office, has  capacity for approximately 80 women and operates similarly to a Category 3 Prison. These are women whose asylum claim have failed, alongside those who have served a prison sentence of more than 12 months, generally for petty crimes, or who have broken immigration laws.

In 2019 over half – 61% – of the people held in immigration detention centres eventually gained their freedom to live in and contribute to the community.

The figure for 2020 was 74%, and for women in 2018 it was 86%. So for most people detained, the Home Office’s decision to detain is successfully challenged. Immigration detention serves no acceptable purpose.

Notes on “People at the end of the asylum application process” :